‘Tomar’ means ‘to take something’ for example, ‘toma este lápiz’ (take this pencil). It is not used, however, for ‘to take someone to another place’. This would be with the verb ‘llevar.’ For example, ‘Os llevo al aeropuerto’ (I’ll take you to the airport). Tomar has several other meanings. These are:

To have food and drink

Instead of ‘have’ Spanish speakers use ‘to take’ when referring to ‘having food/drink’. For example, ‘Tomo un café cada mañana pero no tomo tostadas’ –  I have a coffee every morning  but I don’t have toast.

There is no verb for ‘to sunbathe’ instead the phrase is ‘tomar el sol.’

The verb to ‘to lend’ is ‘prestar.’ There is no verb for ‘to borrow’, however, and so to make the distinction the phrase is ‘tomar prestado.’ For example,

Tomar el pelo – to kid someone.

Dar means ‘to give’ (though not to give a present, this is ‘regalar’). However, it also has many other meanings which we will go into below.

Dar + noun is used for a variety of body actions. Such as:

Darle is also used to express that something stirs an emotion in you in the same way that we would say something ‘makes us angry’ or ‘makes us upset.’

‘Le da pena cuando su hijo no saca buenas notas’ – it upsets her when her son doesn’t get good marks.

Darle susto – to give a person a sudden fright.

Darle asco – to disgust someone   (make someone disgusted).

Darle calor/frío – to make a person hot or cold.

Darle hambre/sed – to make a person hungry or thirsty.

Darle ganas de hacer algo – to make a person want to do something.

‘No me he dado cuenta de que el escalón estaba allí’ – I didn’t realise that the step was there.

And ‘dar la vuelta’ means ‘to turn around’.

‘Dar’, when applied to trees and fruits, means ‘produce’ or ‘bear’.

‘Dar igual’ means ‘to not care about something’

‘Me da igual no haber sacado un ocho en el examen’ – I don’t care that I didn’t get an eight in my test.

‘Dale que te pego’ means to keep insisting in something, to show that somebody is stubborn.

The reflexive verb ‘parecerse’  means ‘to seem like’ or ‘to look like’. You use it when you want to make comparisons between two people.

‘¿A quién te pareces en tu familia?’ – who do you look like in your family?

‘Pues, me parezco a mi madre de aspecto y mi padre en personalidad’ – well I look like my mother but I am like my father.

If you wish to comment on someone’s mood or appearance that day then use you use parecer + adjective.

‘Pareces enfadado conmigo’ – you seem angry with me.

‘Me parece que trabaja bien’  –….it seems to me that he does good work.

‘pero no parece que le guste…’ – but it doesn’t seem to me that he likes it.

The final way to use parecer is for the question ‘what do you think?’

‘¿Qué te parece el partido?’ – What do you think about the match? (Or literally, how does the match seem to you?

¿Qué le parece la casa a tu madre? – What does your mother think of the house?

Examples: ‘No me parece bien que no vaya a clase’ – It doesn’t seems right to me that he skips class.

Examples: ‘Me parece mal que mal que el perro esté siempre fuera’ – It seems wrong to me that the dog is always outside.

For detailed explanations on all Spanish grammar, including verb tenses, nouns, adjectives, adverbs, pronouns, participles and the subjunctive, translation lists and a comprehensive ‘How do you say?’ section covering phrases to use in all types of conversations, buy our 5-star rated book, Spanish for Geniuses: Grammar and vocabulary to get you speaking with fluency and confidence. 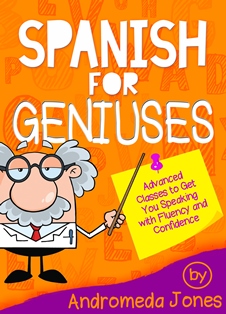 Stuck on your Spanish?

Discover a book that cuts through the jargon and gives you the phrases you need to speak with confidence.